For this wedding in Selma, Alabama, the bride's inspiration sang "Spring" - from the arrangements to the colors, everything was bright, fun, and happy. The back lawn of Sturdivant Hall was designed using two tents with an open-air courtyard in between. The Grand Entrance tent was full of flowers that led guests inside. The courtyard was the setting for the guest tables and soft seating. Once the sun went down, the bistro lighting lit the courtyard beautifully. The second tent featured the stage and 20 ft. trees. The trees were up-lit to cast shadows of the leaves on the tent ceiling.  But the show stopper of the reception space was the venues three-tier fountain which was filled with tulips, garden roses, bells of Ireland, and delphinium.  The photos (taken by Leslie Hollingsworth Photography and filmed by Easton Film Co.) of this gorgeous day should not be missed and are all available in the full gallery here.  Read on, also, to hear more about these incredible vendors - including Southern Styled Events and Tea Olive Designs (Floral & Event Design) - who brought together the perfect day!

The black tie garden party theme was heavily focused on flowers and botanicals, particularly vivid, multicolored spring florals.  Rebecca from Tea Olive Designs (Floral & Event Design) wanted to dream as big as the bride did, and the result was magic! The ceremony and fountain flowers seemed to burst from their arrangements, and she executed the bride's dream of having trees brought in for the band tent. The first tent had a clear top, which not only brought light and a view of the trees above in, but it also felt like a greenhouse. Rebecca created a garden in-between the two tents, and added potted plants around the tent stakes and soft seating to make the theme seamless. The botanical theme even made its way to the bride's dream dress with its floral embroidery, which was purchased at Kleinfeld Bridal.

In the planning process, the bride and groom were focused on making sure that each event and element of the weekend felt like them. They tried to weave their personalities through the largest decisions, like color scheme, menu, and band, to the smallest details, such as the U.S. Capitol cookies, patriotic pass-arounds on the dancefloor, and "fun fact" napkins with details of our lives in D.C. They also uniquely personalized their bridal party gifts, as well as their gifts to each other.  One of the bride's favorite gifts to Michael, whose 30th birthday was two days before the wedding date, was a surprise groom's cake complete with collector's bobbleheads of his favorite band, Phish. The bride, her mom, and her sister are known as the "Jackson Girls," so on what would be her last day as a Jackson Girl, she gifted them with rings of their birthstones: aquamarine and sapphire. She and her grandparents traded gifts of handkerchiefs. Their gift to her was a special heirloom from her great-grandmother, and her gifts to them were embroidered with a sweet message. They certainly came in handy during the big day!  Blue was the main complimentary color for the wedding day, and the bridesmaids became known as the "Blue Crew." Their blue embroidered getting ready outfits were a gift that reflected the bride's summers spent in West Texas going to camp. The bridesmaids dresses were made of a similar fabric to the bridal gown with blue tulle wraps for the ceremony. The bride gave her bridesmaids funny socks with pictures of their faces on them snapped when the bride asked them to be in the wedding, and they even wore them at reception!

The vendors for this special day understood the bride's vision and helped her take it one step further. The custom champagne wall built by Paul Wilkerson and the frozen margarita bar (their favorite drinks) were huge hits with the guests. And the bride spoke with Alex at AG Events for an hour about their shared love of design, lighting, and drapery! To add even further detail to the day, the bride's Great Aunt owns a candy company, Gantt Candies, which is incredibly special to the family. Her addition of the best peanut and pecan brittle in the south were the bride's favorite part of the welcome boxes.

1. Be very specific with your florist on the color scheme you want.

2. Don't be afraid to incorporate personal details! This makes it even more fun for the guests! 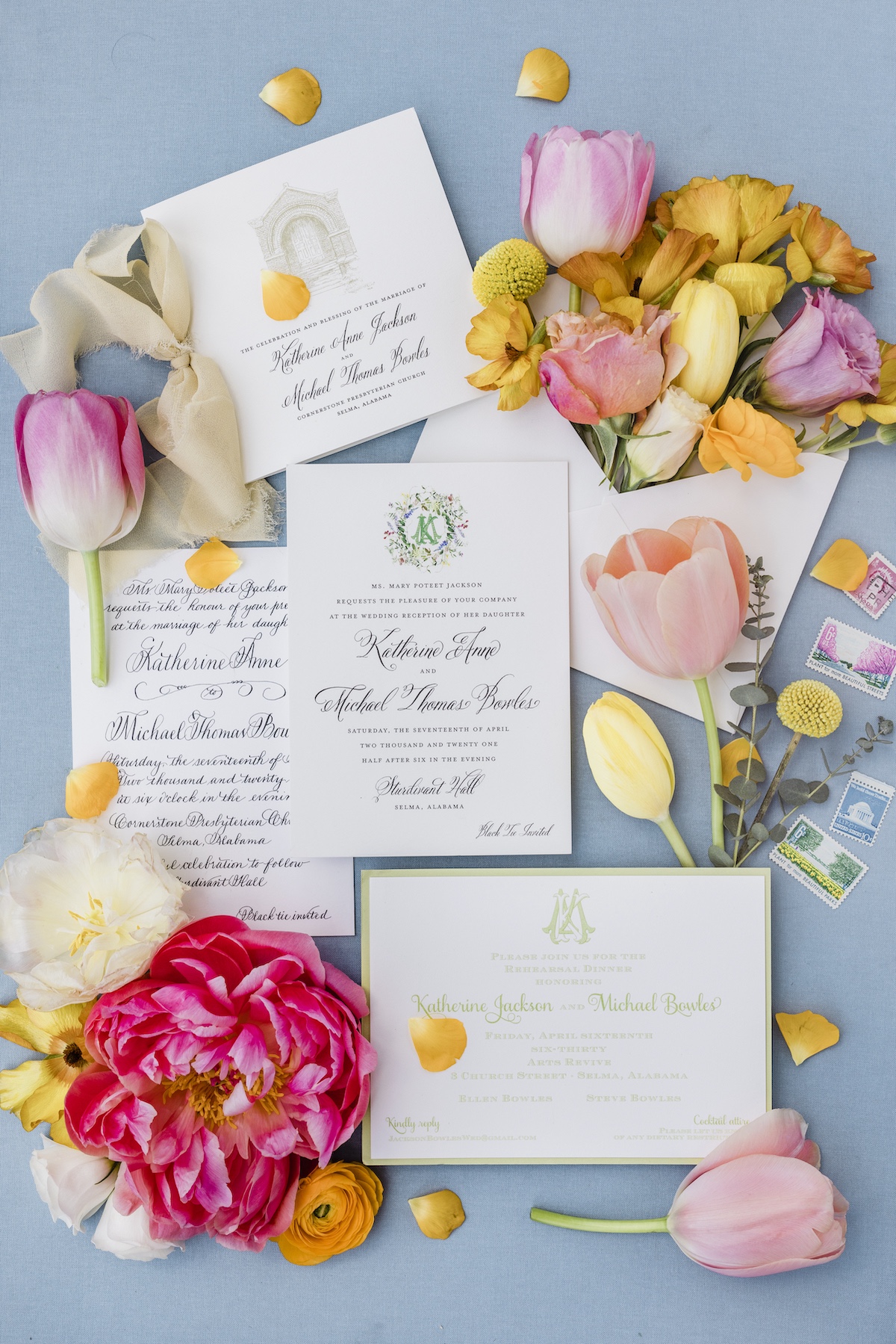 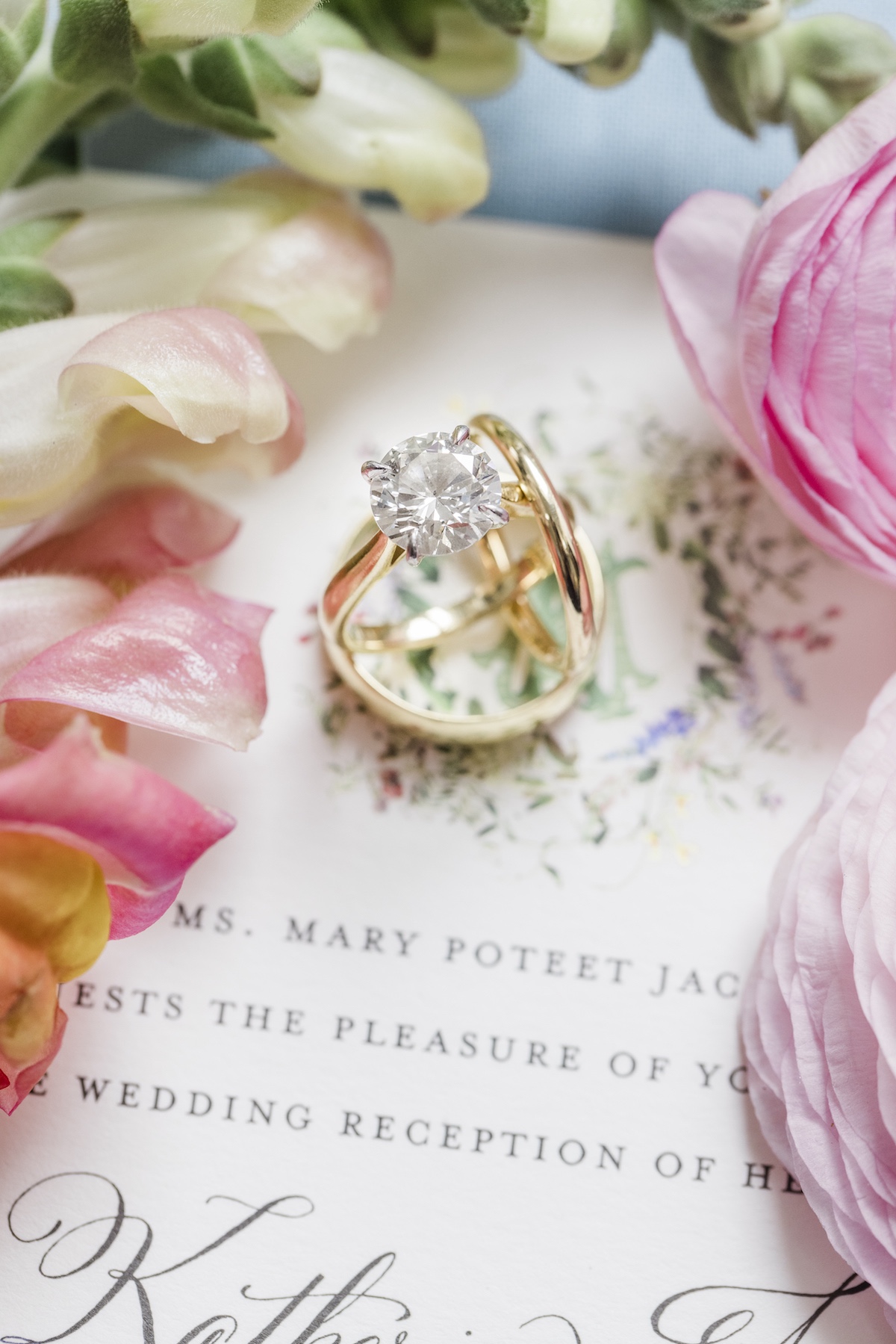 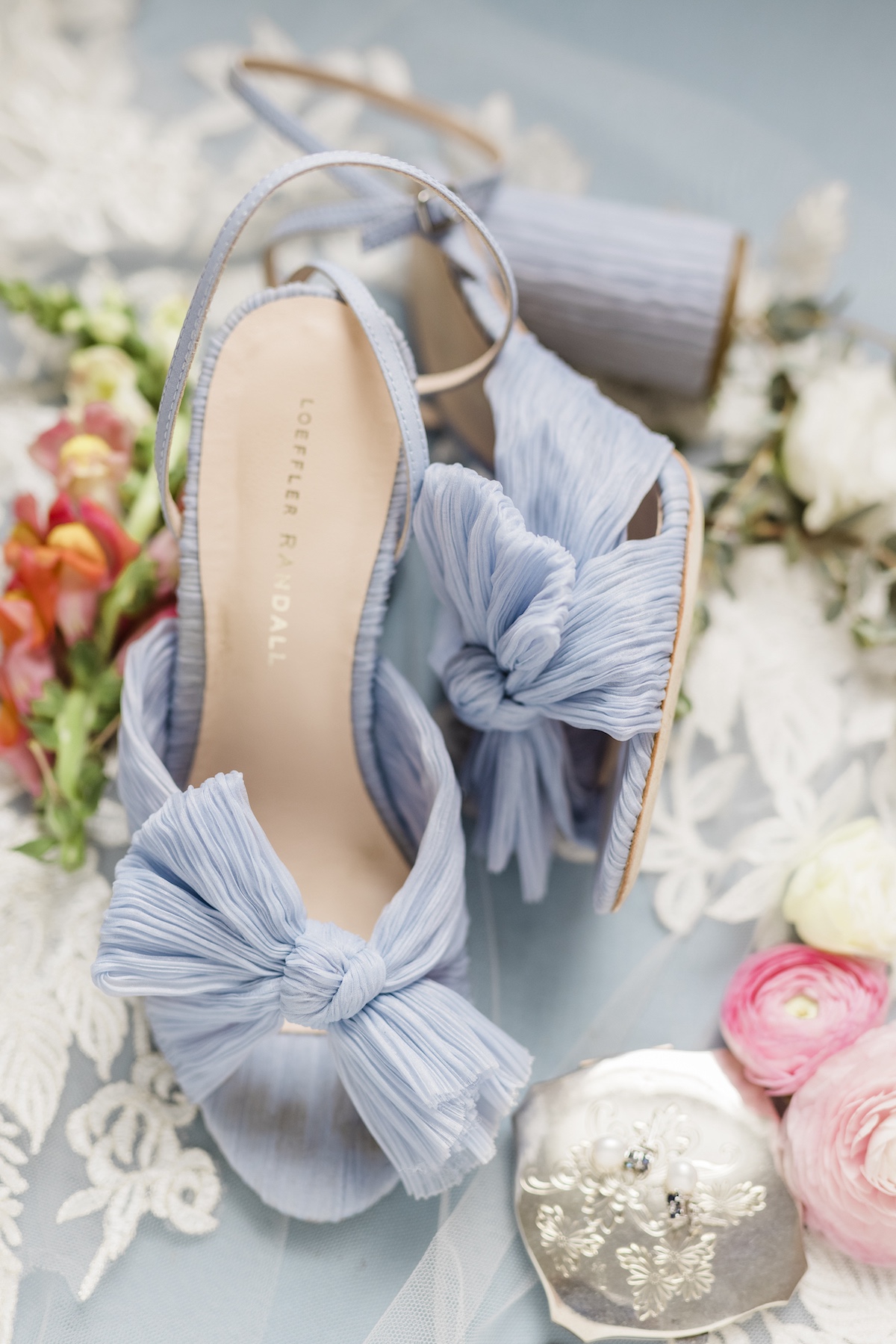 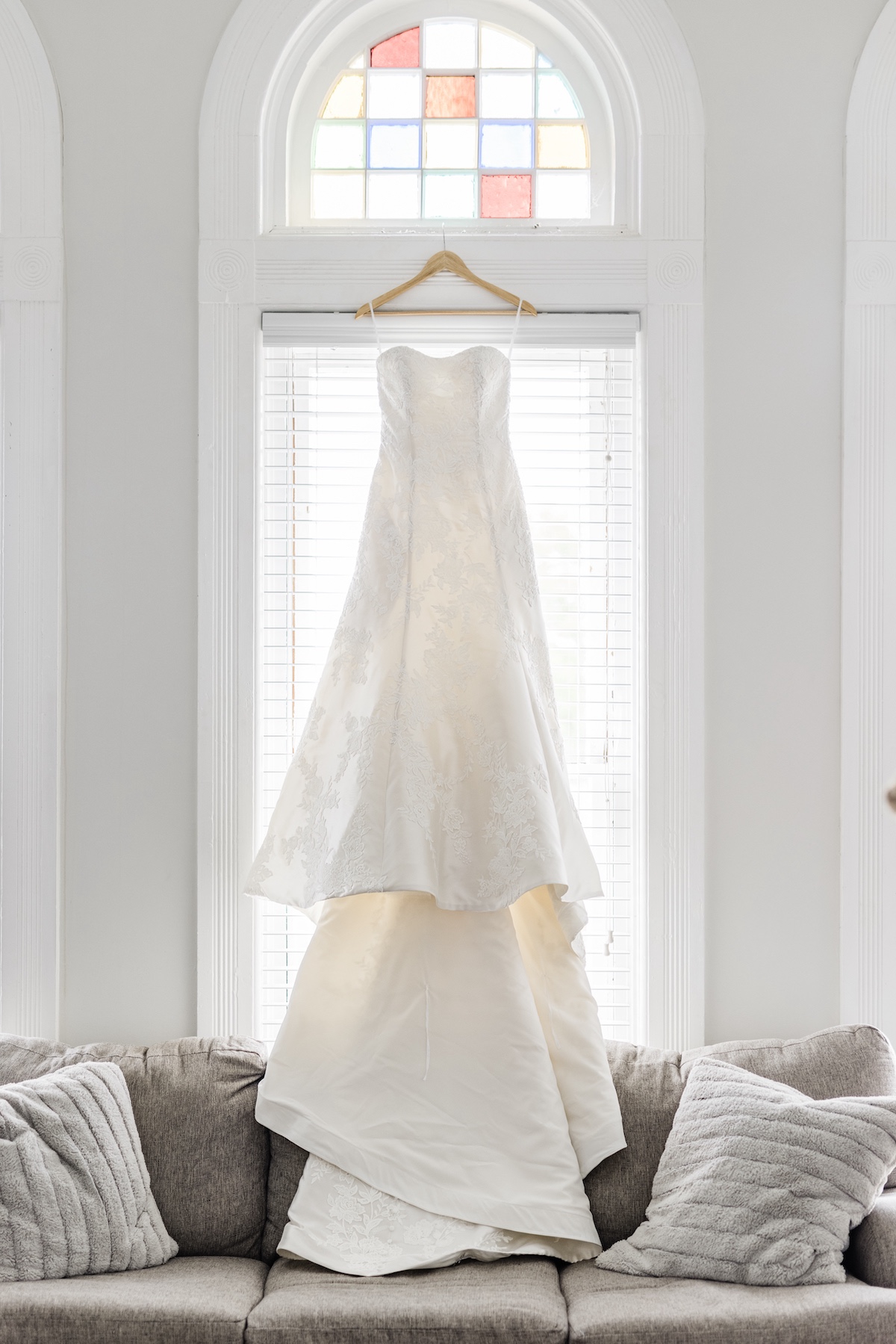 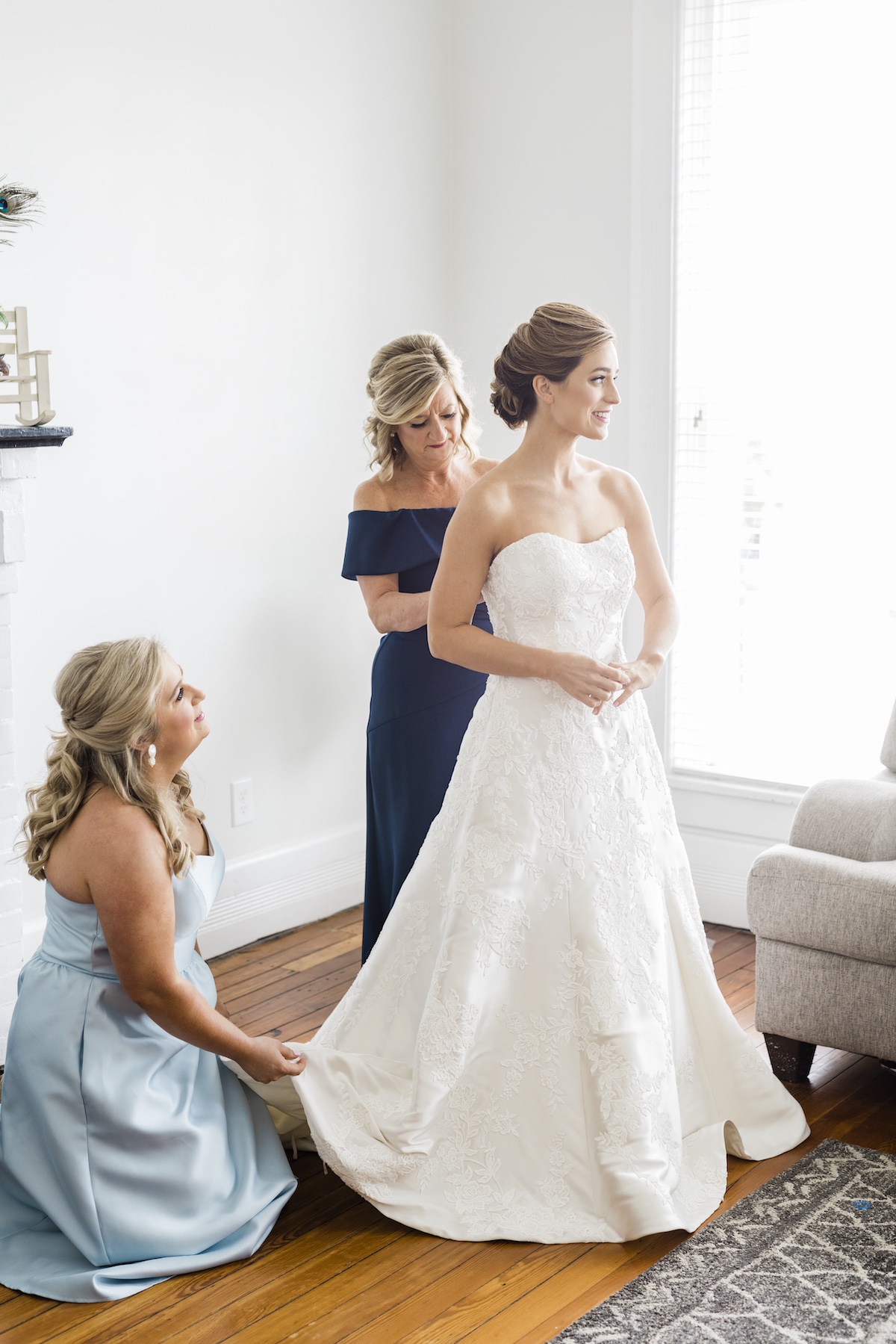