Inspired by a surprise proposal in NYC in front of Tiffany & Co., this Arkansas team brought the big city to Little Rock for this adorable couple. The bride, JoAnna always dreamed of a black-tie affair and wanted to go all-in on their big day. The groom wore a crisp white tuxedo and the bride wore a stunning lace gown with a bateau neckline a la Holly Golightly in that famous scene from Breakfast At Tiffany's. They started with a black and white color palette and introduced hints of blue throughout the wedding.

Meredith Events was excited to design this chic monochromatic wedding and was able to go all out on the decor because the bride's family owns an event production company! How lucky is she? The ceremony was held at Otter Creek Assembly and the sky-high ceiling of The Grandeur House was perfect for this grand reception. We can't get enough of the over-the-top floral chandelier enhanced with live flowers by the talented Vase And Vine. Sky Touch Photos didn't miss a single moment! Keep reading to hear more from the bride, JoAnna, and Meredith Corning about the inspiration behind this special day. Be sure to check out the full gallery to see all of the photos from this beautiful wedding.

Some proposal stories are so inspirational that the entire wedding is planned with this precious memory for the couple in mind. Josh planned a surprise proposal on JoAnna’s family vacation in New York City. Right in front of the Tiffany & Co. on 5th Avenue’s storefront (and JoAnna’s entire family), Josh dropped to one knee and asked for her hand in marriage. “He knew that my family and I were taking a trip to New York City around Thanksgiving and that I would be visiting the Tiffany and Co. store on 5th Avenue. For a long time, I have wanted to reenact Audrey Hepburn’s famous pose looking in that store window. Josh’s idea was to fly to New York City to surprise me. My parents were in on it, but I had no idea! He flew in on the Wednesday before Thanksgiving, unbeknownst to me. I had my reenactment photos taken that evening and as soon as they were taken, I heard a quick, ‘JoAnna…,’ exclaimed from behind me. I turned around and saw Josh there on one knee. He tricked me all day acting like he was at work and in meetings. I was shocked and it’s definitely a moment I will never forget!”, JoAnna recalled.

Their wedding may have been designed with a city look and feel, but it took place in the countryside of their hometown of Little Rock, Arkansas with all the accoutrements of southern hospitality at its finest. JoAnna knew she wanted a black-tie affair and for her bridesmaids to wear blue dresses. This really set the tone of the event and color palette, which worked well against the Tiffany blue gift boxes at each place setting. JoAnna’s family owns one of the largest event production companies in the area, so dramatic elements such as golden uplighting, bronze ceiling drapes, and cool spark fountains were a must and incorporated to give the evening an electrifying touch. One of the best DJs in Arkansas, DJ Jellybean, is a close family friend and has known JoAnna since she was a little girl. DJ Jellybean kept the party going while making every moment extra special.

Meredith Corning with Meredith Events explains, “We utilized a faux floral chandelier that Central Arkansas Entertainment had in their warehouse. Vase And Vine added live flowers and greenery hanging from the chandelier that dripped all the way down and brushed the top of the white settee beneath. It was absolutely beautiful and definitely a focal point of the event.” According to JoAnna, “My fondest memory of that day was when Josh and I drove to The Grandeur House in his truck to sneak in the back entryway and got to eat alone together before seeing everyone and taking photos. Though it was short, it was nice to spend a few moments together alone to enjoy our first meal as a married couple.”

ADVICE FROM THE PRO

1. For a themed event, it is always important to edit in an effort to negate a "cheesy" design. Less is often more.

2. Ask yourself, "What would Audrey (Hepburn) do?"

3. Black and white makes a classy base color palette to add in your pop(s) of color here and there without going overboard.

We partnered with Meredith Corning PR to bring you this timeless wedding inspiration. As always, thanks for supporting our sponsors! 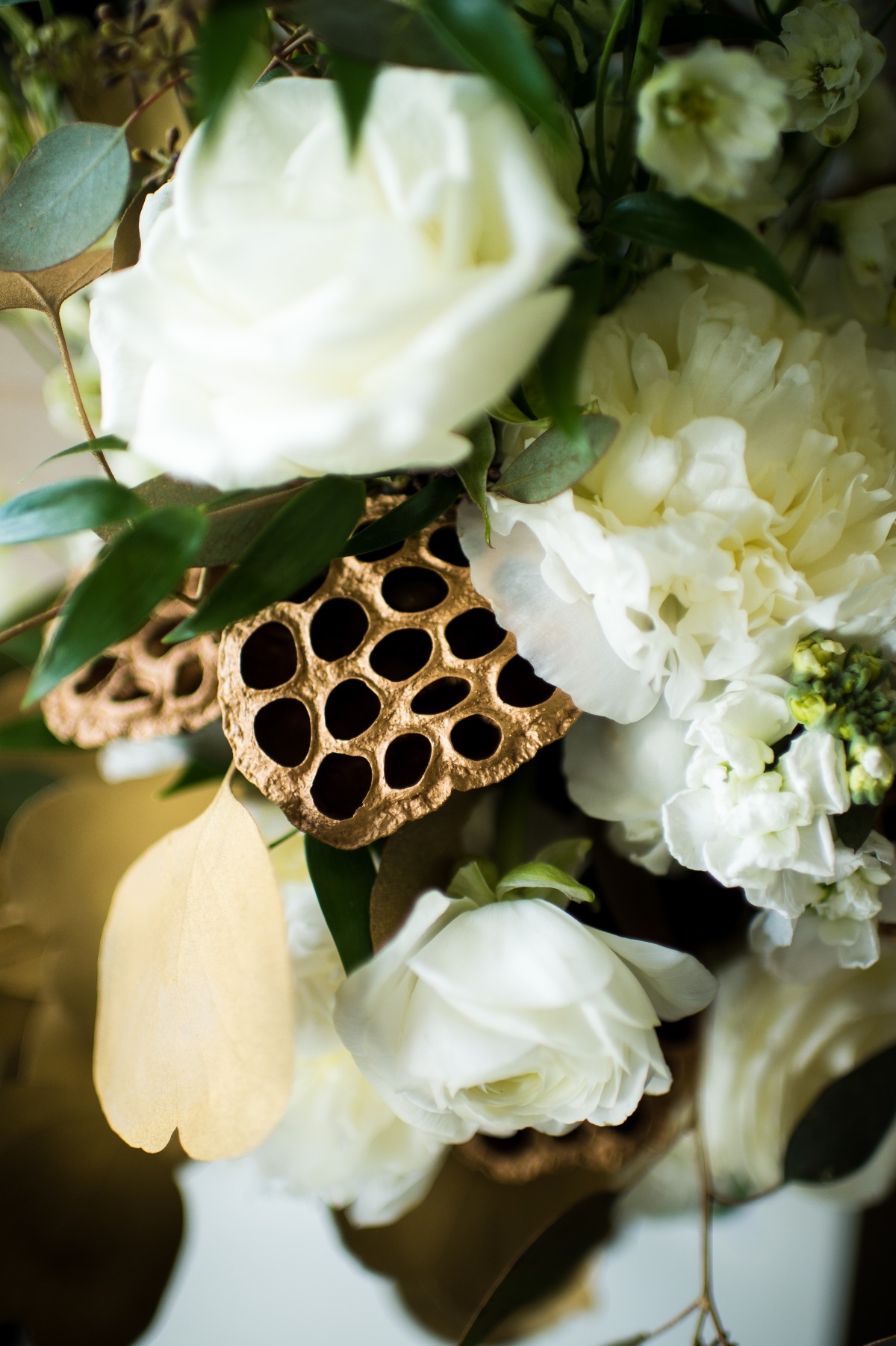 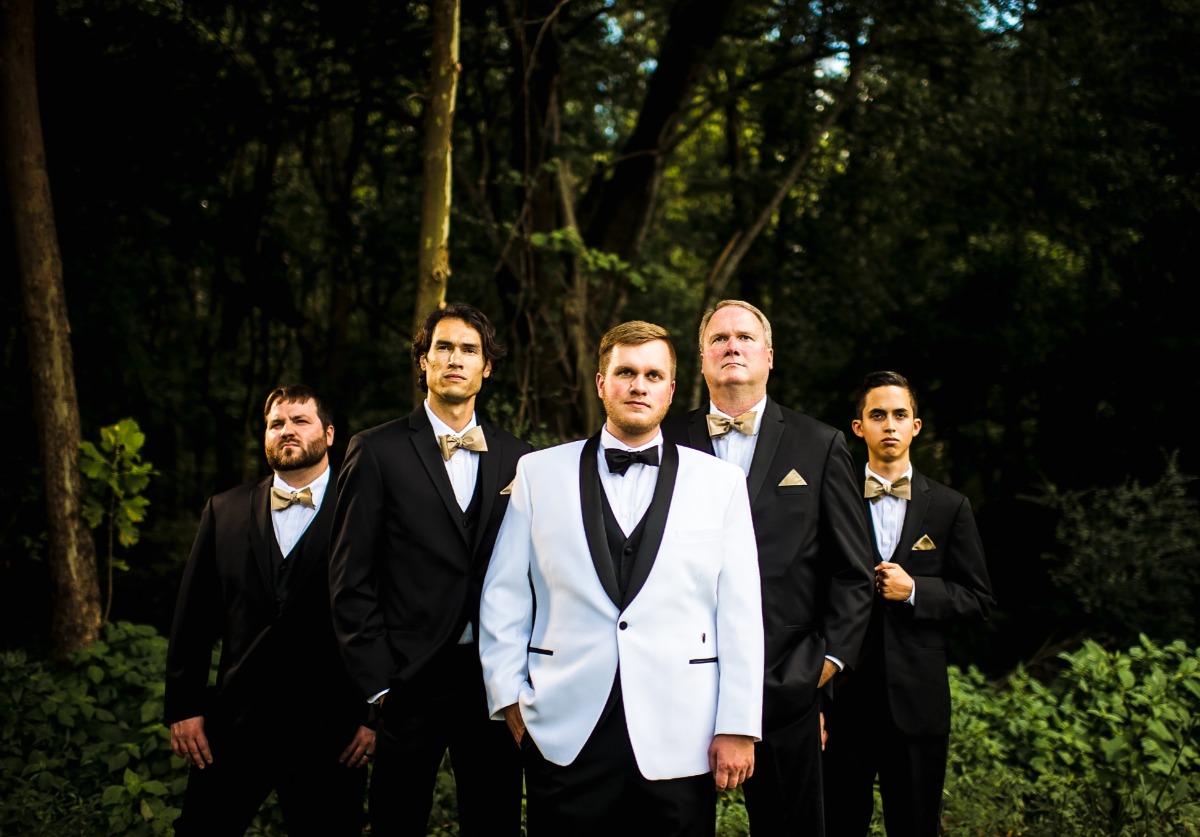 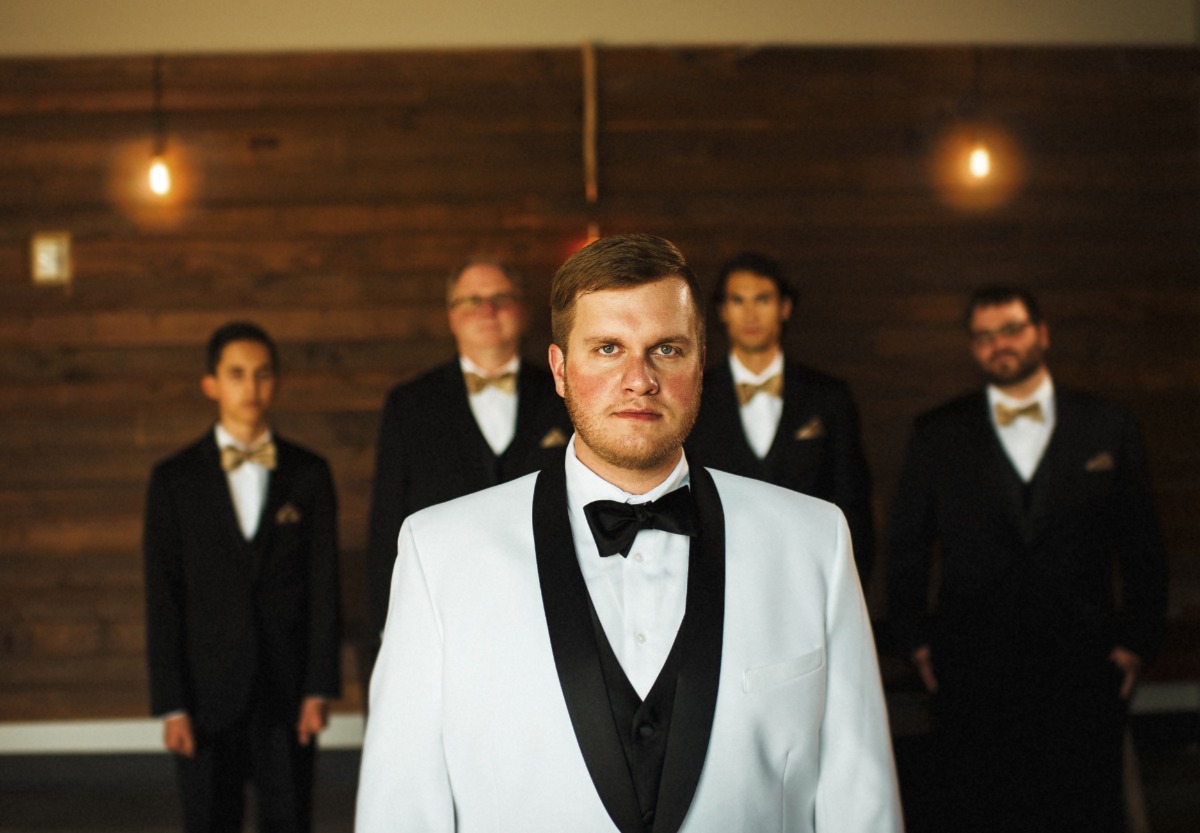 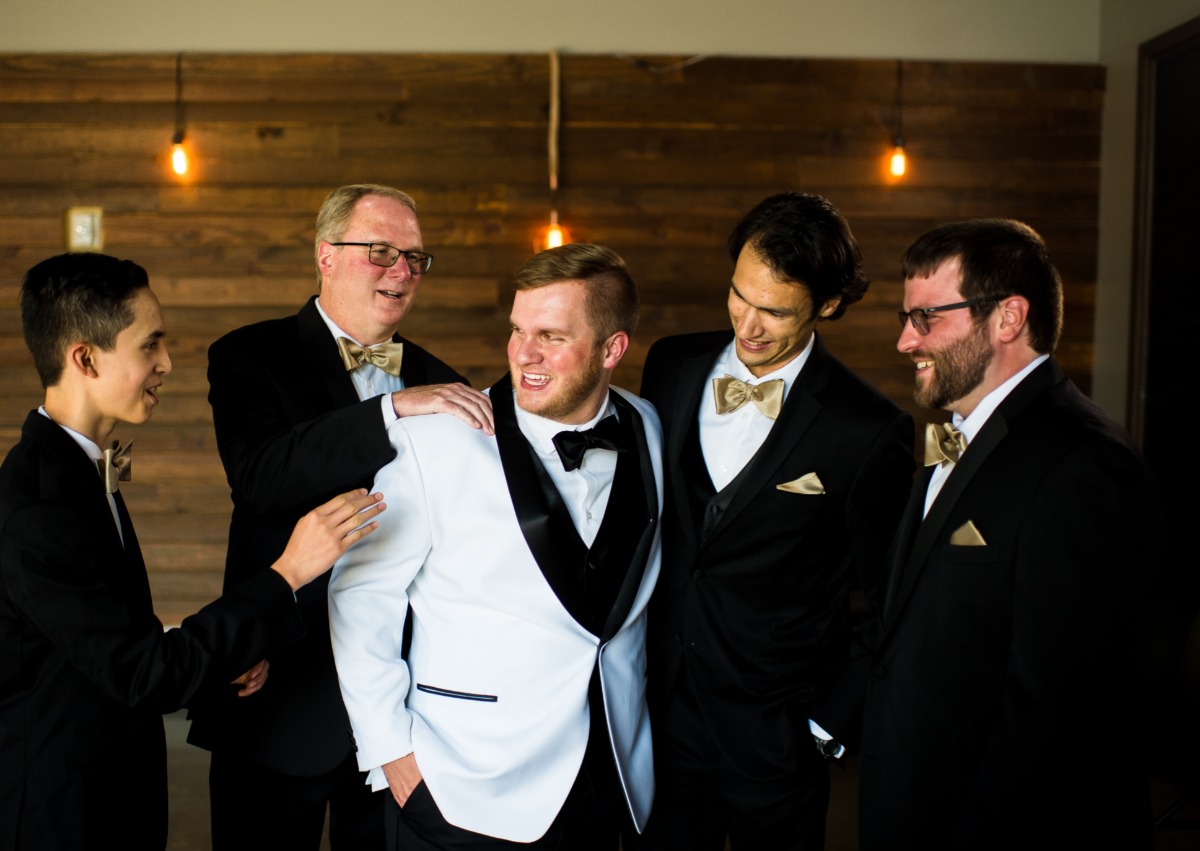 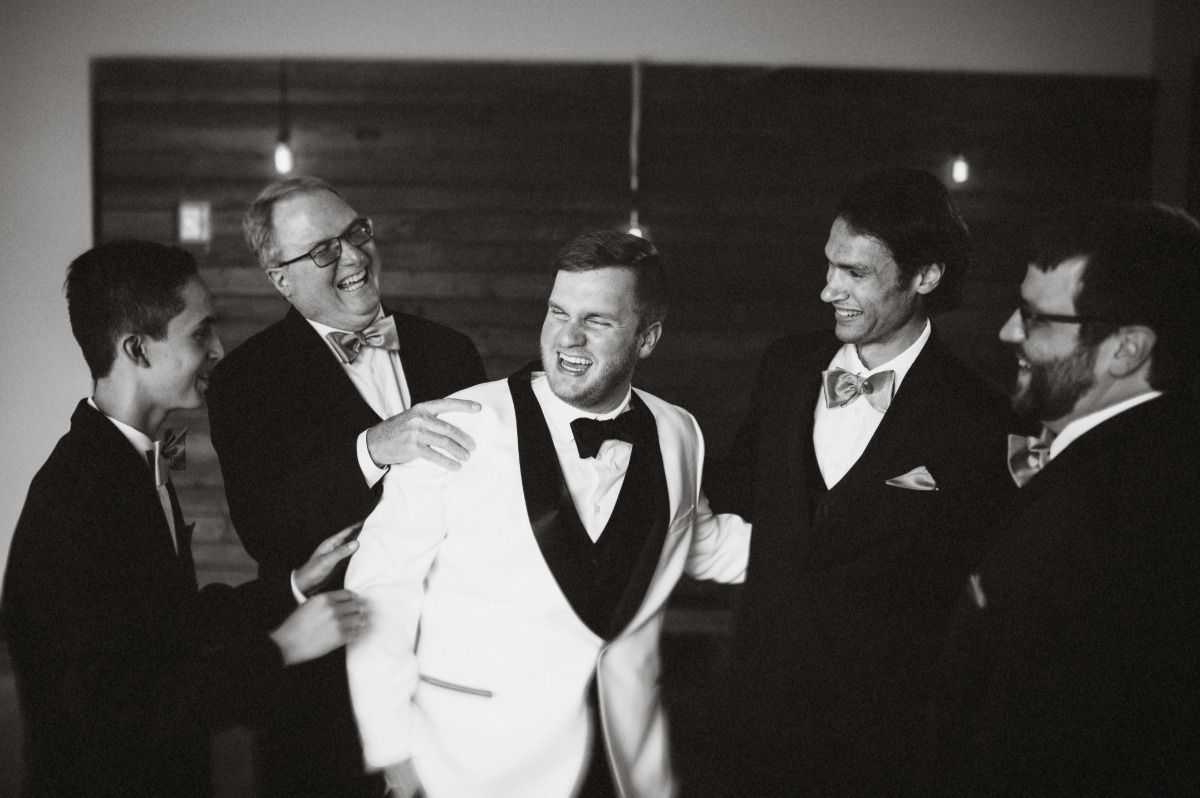